A female inmate sits on death row. The section of the facility where her cell is located is small. There are eight units  and five are currently occupied. She sits on the floor with her feet flat and her knees are raised. She rests her arms gently on her knees. Her back is against the wall. She is staring upward through the tiny sunlight window near the ceiling. It is the beginning of nightfall. A few clouds are scattered against the starry night sky. Her eyes close just for a moment and instantly images of a gurney with restraints come to mind. Lethal injection implements are on a surgical tray. Suddenly she is looking up at masked people all around. She is trying to break free but is unable to speak. As she struggles with the restraints she grunts as if she is trying to cry out. The masked people, probably doctors, nurses and observers, are speaking in muffled unintelligible language. She tries to speak again but, her lips won’t move. She is becoming more and more frustrated to the point of exhaustion. In a split second she realizes that she is dreaming. Her head bobs up and down abruptly and she is awake. Her forehead is covered with beads of sweat and her breathing is heavy. Her eyes are moving and circling as if they are searching for another train of thought – another path toward something less frightening.

A vision of Grandma Helen flashes before her eyes. She remembers Grandma Helen singing to her mother when she was about five years old. Grandma liked to call her daughter Mama Debbie. This is a memory which always comes to mind in tough times. Mama Debbie was about twenty-one.  The five-year-old girl stands in the doorway of the kitchen…afraid to come in because something is wrong. Mama Debbie sits on the floor with her head lying on Grandma Helen’s lap. Debbie was crying inconsolably. Grandma Helen just rubbed her head and let her have a good cry.

Grandma told Debbie, “You just gotta’ fix your mind on seeing Maxie again one day, you will see him again… in a city called Heaven. I felt just like this when yo’ daddy died. My heart was crying out and my soul was searching for an answer. All I could do was sing the songs my mamma sang to me.”

Grandma sings, “I am a poor pilgrim of sorrow… I’m lost in this world all alone…”  (The song fades.)


The inmate begins to envision her crime. She remembers sitting on a bar stool of a local pub. This is something that she and many other postal workers did after work. They store their belongings in their lockers, go home and change, and head for the Second Story Bar and Grill. The bar is smoky and noisy. People are laughing and talking about work, sports, families and anything that is on their minds. A pool game is going on nearby. Several men are playing pool, talking trash, and talking about the old days. She overhears a little of the bantering and thinks to herself, “These old cats love their pool and their trash talking.”

She wasn’t paying much attention to the trash talk, but something made her random thoughts stand still. She starts to listen more closely and hears a disturbing exchange of words. She rises slowly and walks toward the men involved in the conversation.  They had just finished playing pool for the night. They were collecting all of their personal belongings and settling their winnings and losses. She approaches one of the men who is putting away a pool stick.

“I heard you talking about how you beat this man to death back in the day. You killed him with a mechanic’s wrench over a petty car repair.”

The man is surprised at the intrusion but more shocked by her knowledge of the story and the details. He says, “Huh? What you…?”

She interrupted, “You were mad because his price didn’t match your wallet. At least that’s what you said. Well, I think you just couldn’t pay the bill. Your “homies” just told you the price was fair but you wouldn’t listen. You said, ‘he was just a working stiff…who cares?’

She shouted, Well, I care! That working stiff was my father! She pulls out a gun and points it directly at his head. Everyone clears the area. Some people run out of the club. A few people stay close to the door. The man raises his hands up slowly, drops to the floor, and says “please”. She almost pulls the trigger… but, with tremendous force she hits him with the handle of the gun two times. The second forceful blow opens a large gash as he falls to the floor. He is dead. Realizing what has happened, she lets the gun fall to the floor. In shock she just stares blankly at what she has done. The police arrive and take her away.

As the memory ends, her mind clears and returns to the present.

In total frustration she says aloud, “(sigh)…Grandma Helen,
I know you’re up there. (Choking up) I’m gonna’ die soon. I have been reading my Bible. I’ve been praying my prayers. (In tears)You started me out praying when I was just a little girl. These last few days have been… hard, but I am trying to be strong. I get it now. I know what that song means. Mama Debbie gave up on me. She stopped coming to see me long before she died. Rudy gave up on me too because I wouldn’t fight this thing. But I get it now. It’s all about my heart. It’s all about Jesus in my heart. It’s all about Heaven.”

She starts to sing…

I am a poor pilgrim of sorrow
I’m left in this world alone
I have no hope for tomorrow
But, I’m trying to make Heaven my home


Sometimes I am tossed and driven
Sometimes I don’t know where to roam
But I’ve heard of a city called Heaven
And I’m trying to make Heaven my home. 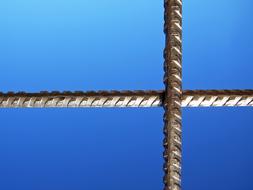