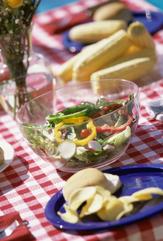 I always thought that the “church picnic” was fine when they held the event in the backyard of the church. But, once we were all on the bus, I began to enjoy the long bus ride. We got to sing, and talk, and eat snacks, and sleep.When we woke up, we got to start all over again.

Finally, the bus pulled into a parking area close to a forest. As we got off of the bus, the place looked like all of the other forest preserves which I had seen before. Then, Rev. Judson lead everybody on a trek quite a distance from the parking area.

At church, he promised us that we would get to see what it was like for him and for all of the adults who grew up on farms and near the woods. It was a little scary with all of the bugs we don’t usually see in the city. The trees got kind of thick – very thick. I’m not sure who was having the most fun on that hike, the kids or the grown-ups. They were pointing out trees, and shrubs, naming the bugs, and looking for animals.

Dad said, “Now this is what walking through the woods was like when I was a boy. The forest preserves you’re used to are just not the same.”

When we reached a clearing, (I’ve read that phrase many times in books, but now it really means something to me.) it was a little like being in another place or another country. Our parents – all of the adults- were so excited at the beauty of this clearing in the middle of the woods. The beauty of the area must have brought back memories for them. There was a beautiful lake with the clearest water I had ever seen. Some of us just stopped and stared to take it all in. I could see my mom and dad just breathe in the air and look at each other smiling. Just at that moment, someone moved closer to the lake.  Everyone moved closer. One of the deacons, I couldn’t tell which one, got an idea.

All of a sudden, a few grown-ups started pointing out and choosing long branches of trees. Then they broke the branches from trees and cleared the branches of excess twigs and leaves. Now they looked for string.

The kids were thinking... “what are they doing?” Now, the funny thing is that Rev. Judson just happened to have a spool of string, just the right kind of string, and a couple of other useful items. Dad had his faithful pocket knife. Immediately, there was scurrying, rushing, laughing, and giggling.

“Wow! Those old people can fish!” said my brother.

After watching them for a little while, the kids caught fishing fever, too. Adults started passing their hand-made poles to the kids. So, we joined in with water splashing, and fish almost flying out of the lake. Where did all those fish come from? They were not very big,

but there were dozens of them. They were so colorful, so squiggly, and so... alive!

It wasn’t long before I caught a fish! I hadn’t noticed this before, but, after you catch a fish, you have to throw it back.

Everyone was throwing them back. What do you do that for? O.K. We’re just fishing for the fun of it. Before long, the adults were

sitting back, laughing and talking, and…the kids were fishing.

We knew that we could play softball, kickball, and race relays later - or maybe even another day. Fishing at the lake was just the beginning of a great church picnic.